I’ve completed an Artificial Intelligence course during my Bachelors and also referred some AI textbooks over the last few years for work. AI, while it does sound fancy and cutting-edge, is a very theoretical subject, even a bit philosophical. But after revisiting those textbooks, I’ve found that Knowledge Representations is one particular topic that I really appreciate.

In simple words it’s all about how you represent knowledge or data. The representations are frameworks for defining knowledge in a way that you feel fit to solve a problem. You could plan to have it unstructured and dump it in a text file somewhere or let it be a simple relational representation in some database or CSV file. For more complex needs, you could use propositional logic, it could be hierarchical - using a tree perhaps - or even be simply procedural such as If-Else rules (in AI lingo you would call these Production Rules). There’s a bunch of them out there. What is critical is that you pick the right representation that will help your task.

Characteristics of a good representation

Let me try to talk about a couple of knowledge representations I’ve come across.

A Semantic Network is a graphical representation to represent objects and relationship between objects. It consists of nodes, directional links and application specific-labels.

Let’s take a very famous interview question as an example - the Guards and Prisoner Riddle[2]. The problem goes like this:

One way to map this information into semantic networks would be to represent each node in the semantic network by the number of guards and prisoners on either side of the river and the position of the boat. Each node can be imagined to be connected to other nodes using structural links that represents the action taken. This action becomes the semantic label for the network.

With such a knowledge representation in place, any problem solving technique can be used that leverages this. “Generate and Test“ and “Describe and Match” are a couple examples - think of it as an algorithm creating new states (nodes) and testing if those states are valid (prune otherwise) and repeat till the solution state is reached. The nodes which don’t lead to the optimal solution is omitted for brevity. This diagram shows that 7 is the optimal number of trips required. 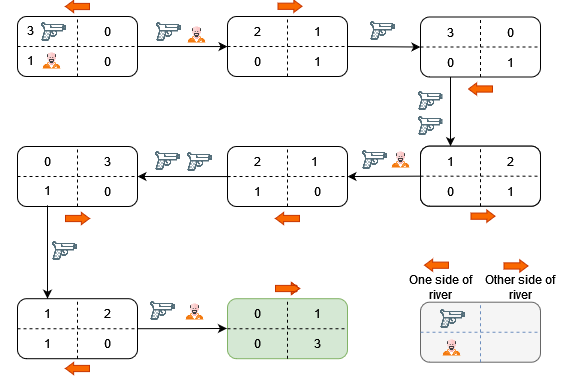 A much more harder problem to solve is the Raven’s Progressive Matrices problem. These are the puzzles you usually find in IQ tests. In short: 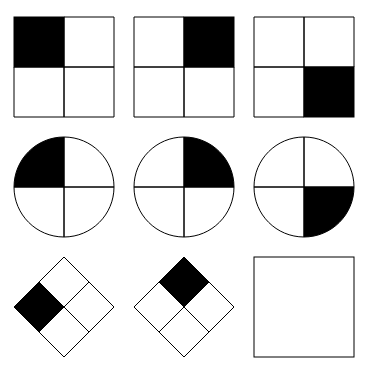 (Example of a Raven’s problem. Image from wiki.) 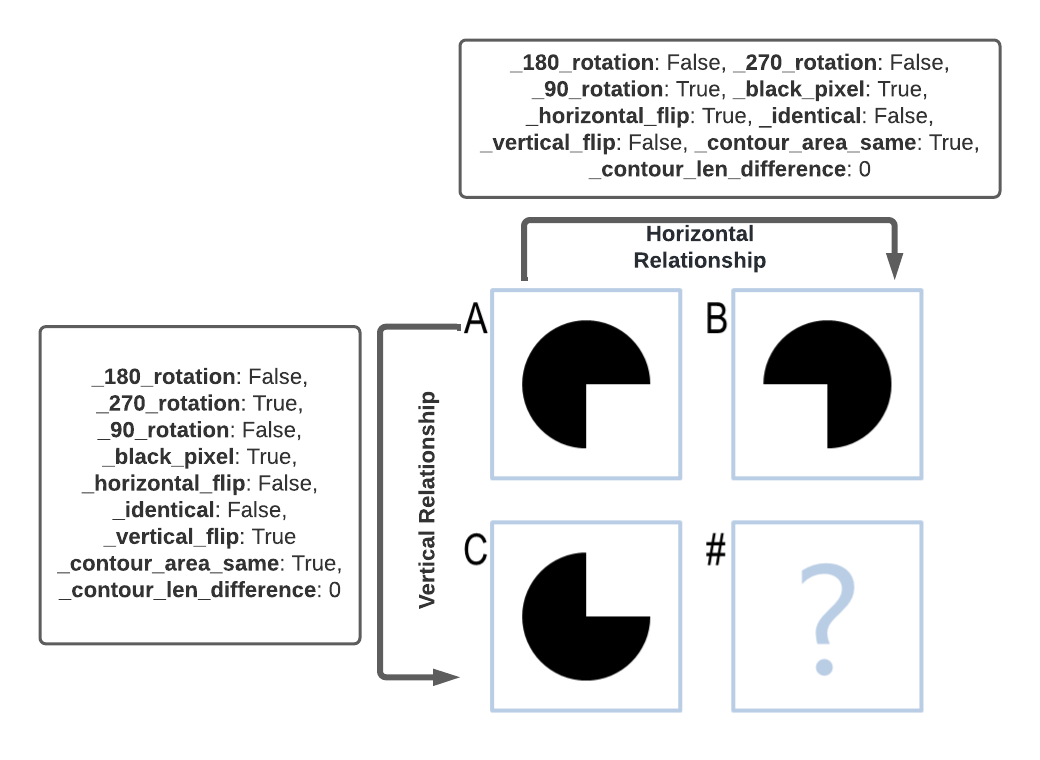 (A complex semantic network representation of a 2x2 RPM-like problem.)

One possible way to construct the semantic network here (as shown in the figure) is by imagining each of the images in the problem to be the node defined by the properties of the image - this could be information such as shape, color, number of objects, etc. The links between images could depict the transformation that happens between images - here, it is the clockwise movement of the black colored component, rotations, and other properties. And, the labels can represent the nature of this transformation, depicted by the key-value pairs.

With this you’ll be able to find the missing image that fits the pattern the best by matching these patterns/relationships (the key-value pairs).

Frames are another form of (a powerful) representation that behave as molecules - they capture a lot of information compared to other methods (atoms). They have slots and fillers and lets the you generate a stereotype using default values.

Let’s imagine a problem from Natural Language Processing, a task where a computer program is supposed to read a simple sentence, read a question based on the sentence and answer that question.

Given a sentence like “Matt and Steve took a green pig to the forest”, frames enable agents to answer questions like:

Using lexical analysis (fancy way of saying how we find out the parts of speech such as verbs, nouns, etc. from a sentence), we can represent the above sentence using the following Frame representation. 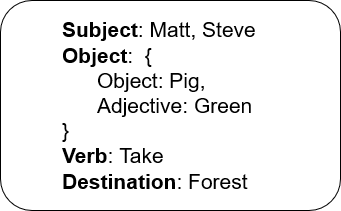 (Frame representation for “Matt and Steve took a green pig to the forest”.)

This year, I started something new, a Masters program from Georgia Tech (OMSCS). Being one of the most famous online Master’s program, you can find plenty of course related information, tips, tricks and what not on the internet. So I intend to start a series championing the topics I learn from the courses I take. Knowledge-Based AI is the first course I took and the journey has been pretty thrilling so far. I’ll be completing the semester in another week and putting up a review article soon.